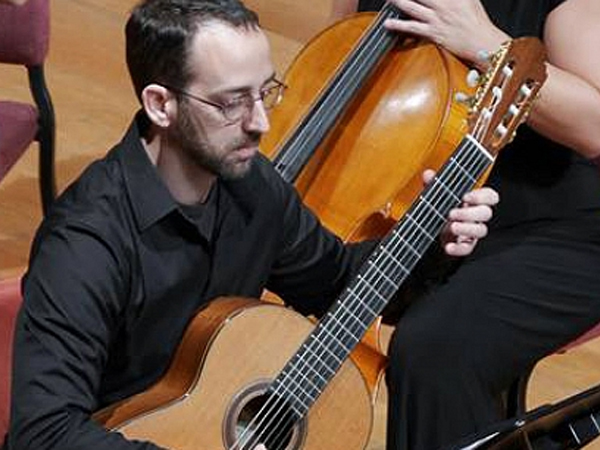 He studied at the Higher Conservatory of Music of the Liceu in Barcelona with the guitarist and composer Jaume Torrent, later doing several Master Classes with the teachers Carles Trepat, Ignacio Rodes, Ricardo Gallen, William Waters and Armando Marrosu among others. His concert activity has led him to perform in different cycles of concerts and festivals: Sant Cugat International Guitar Festival, Mataroní Chamber of Promotion Concert Series, “Picasso and Barcelona” cycle, Classical in the Parks, and the Palacio de Catalan music. It has been directed by directors such as Jordi Montoliu (Chamber orchestras of Sabadell), Jordi Picorelli (Coral Joncar). He has also participated in several recordings and as a composer he has interpreted his works in several concert cycles. He has a wide catalog of sun, chamber and pedagogical music, the guitar being the main driving force of his creations, some of them edited in publishers such as La mano de Guido or Boileau. His “Five Evocative Studies” have been included in the guitar program of the Conservatorio del Liceo.
He also works on the composition of his first concert for guitar and string orchestra (Piel Pintada) that will be premiered as part of the Festival Llobet 2017.
He has been invited on several occasions as a speaker at both the ESMUC (Higher School of Music of Catalonia) and the UAB (Autonomous University of Barcelona). He is currently Professor of Guitar at the AIMB (International Academy of Music of Barcelona) and Professor of Chamber Music and Head of the Guitar Department at the Pia School in Sabadell.

Titles in which he teaches: